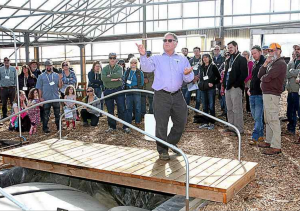 While this is remarkable, it’s the more unusual crops growing alongside the produce that may have an impact felt far beyond Santa Cruz County.

“Cassava, sugar beets, sorghum, prickly pear cactus, mesquite trees, buffalo gourds, cattails,” Blume said. “These are all energy crops that can be converted into alcohol-based fuel. Distilled from sugar, it helps divert waste, is near-zero emission and is low cost.”

As three buses unloaded 150 organic farmers on to Whiskey Hill Farms as part of the 36th Annual EcoFarm Conference’s bus tour Wednesday, its owner discussed the other business residing on the property, Blume Distillation.

“This is just a small, experimental distillery capable of producing about 100,000 gallons of alcohol fuel. We are developing the technology that will go into factories that can produce 1 million to 5 million gallons of the fuel.

In July 2015, Blume Distillation sold a biorefinery system to a South African company in a $5 million deal. Numbitrax, based in South Africa’s Western Cape Province, is producing bioethanol from sorghum, prickly pear cactus and the pulp waste from nearby wineries.

Blume said the technology will be up and running in six more factories in South Africa as well as Zambia, China, Canada and Florida.

“Although there are a number of applications, our primary focus right now is producing clean cooking fuel. Half the world’s population still cooks over wood or charcoal, which is incredibly unhealthy and takes a huge toll on the planet’s forests,” Blume said, demonstrating the fuel to the crowd of organic farmers with a cook stove.

“Four million women around the world die from the long-term effects of cooking over wood or charcoal fires,” he added.

Blume, who is also the author of the critically acclaimed book, “Alcohol Can Be A Gas,” told the farmers that distillation opportunities could not only be incorporated into their farm operations, but might very well be the future of farming in the U.S.

“The average age of farmers in the U.S. is 65,” Blume said. “The next generation can make more from a few acres of alcohol crops as their grandparents made out of a few thousand acres of corn.”

“It’s clean, it’s cheap, it’s good for the planet. It’s produced by the sun so there’s an unlimited supply,” he said. “Plus you don’t have to invade other countries to steal the raw material.”

What: A conference for organic farmers to explore ecologically sound, socially just and economically viable food and farming systems.